150TH COMMEMORATION OF 1798 (INCLUDING BOOKLET)

The Autumn of 1948 saw a large number of events take place across County Kildare to commemorate the 150th Anniversary of the 1798 Rising. Contemporary local newspapers carried reports of commemoration events that took place in Dunlavin, Monasterevin, Naas, Ovidstown and Rathangan amongst other places. The main events took place on the Gibbet Rath on the Curragh however, where several hundred Irish rebels had been executed by British forces during ’98.

The National Graves Association Commemoration organised the first large event at the Gibbet Rath on Sunday 29th August, with Éamonn Ó Modhráin the Chairman. Droichead Nua, Williams’ Corner Brownstown and Kildare Town were listed as the assembly points for those marching to the event.

The National Graves Association also published a short bi-lingual version of Seosamh Ó’Muirthile’s work on 1798 as part of the anniversary which has been digitised by Kildare Local Studies Department and is now available to view here: Kildare 1798 Commemoration (1948) Booklet

The official national commemoration took place on the Gibbet Rath, the Curragh on Sunday 10th October under the auspices of the All-Ireland ’98 Commemoration Association. It featured an Army Guard of Honour, with a wide range of groups parading before the platform including members of the Old I.R.A., National Federation of Irish Ex-Servicemen, G.A.A. Clubs, Boys Scouts and many other public organisations. Symbolically it included a party of 80 Wexford pikemen bearing the Vinegar Hill and Cloughbawn banners. An old Kildare Land League Banner also featured.

Dr. Keogh, Bishop of Kildare and Leighlin, opened proceedings by blessing the foundation stone of the statue of St. Brigid to be erected at the spot. Fr Murphy, P.P., Glynn, Co Wexford, guest orator from the All-Ireland ’98 Commemoration Committee and Tánaiste and local T.D. William Norton both appealed to the large crowd in attendance to remain faithful to the ideals for which the Kildare ’98 insurgents and to persevere in their efforts to bring about the ending of partition. 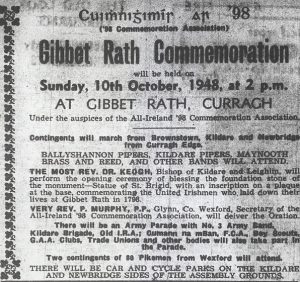 Other events took place in Monasterevan (with almost 6,000 people marching through the streets to commemorate the memory of Fr. Prendergast who was killed in Monasterevan during the Rebellion), Naas to mark the 150th anniversary of the Battle of Naas, and in Rathangan where Col. Eamonn Broy (former Chief Commissioner, Garda Síochána) spoke in Irish about the honour to be called upon to speak in his native place during such a ceremony. The Ovidstown ’98 Memorial Committee also organised a commemoration in Ovidstown in September, with Rosamund Jacob, Tom Barry and Capt. Bob Monteith all speaking at this event also. 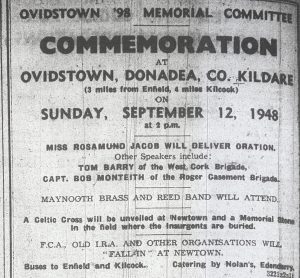 Previous post: HIS CO. KILDARE RESIDENCE HAS WINDOW FOR EACH DAY IN YEAR