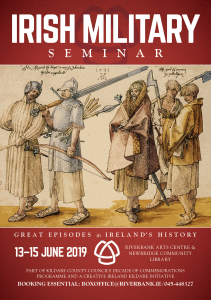 View the entire Programme by clicking on this link

Highlights
Thursday 13 June: Kildare History Shorts: 3 presentations on one night
Friday 14th June: Irish Defence Forces Night: Jadotville and the Battle of At Tiri
Saturday 15 June: Full day of presentations from noted historians including Dr. Leeann Lane and Dr. Myles Dungan. Diverse topics to include The Battle of Kinsale, IRA Border Campaign 1956 and the Irish at the Battle of Little Big Horn.

19.00 pm Official opening of the Seminar on the 75th anniversary of the D-Day Landings
A Bloody Dawn: The Irish at D-Day – Dan Harvey Book Launch in conjunction with Merrion Press

KILDARE HISTORY SHORTS
19.15 pm The story of the crash of a Luftwaffe bomber near Kiltealy, Co. Wexford, October 1941 – Michael Rowley
19.55 pm The advent of firepower on the battlefield 1899: fire and manoeuvre in the early battles of the Boer War  – Liam Kenny
20.45 pm That there was significant republican activity in Co. Kildare during the War of Independence  – Michael Murphy

20.00 pm The Battle of At Tiri – Sgt. Wayne Fitzgerald, Editor of An Cosantóir in conversation with veterans/historians

10.20 am The Reality Of Ireland’s “Neutrality” During The Second World War – T. Ryle Dwyer

11.35 am Hell Or Some Worse Place: The 1601 Spanish Invasion of Ireland and The Battle Of Kinsale – Des Ekin