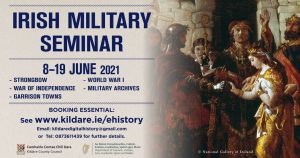 The War of Independence, World War I, Strongbow and the extensive collections of the Military Archives are among the topics that feature in the 2021 programme which includes Zoom talks (see links below for free registration) and some pre-recorded interviews with local County Kildare historians.
Please email localhistory@kildarecoco.ie or phone 0873611439 if you require any further information.

Thursday 10th June – 7.30PM (via Zoom)
‘Representing the Last Moments of Irish Revolutionaries in Museums’ – Dr Siobhán Doyle (National Museum of Ireland)
Siobhán Doyle works in the National Museum of Ireland, having previously worked in the GAA Museum and Glasnevin Cemetery Museum. She has a PhD in Museum Studies, concerning the material and visual culture of modern Ireland with particular focus on the role of exhibition display in commemoration.
https://www.eventbrite.ie/e/military-seminar2021representing-the-last-moments-of-irish-revolutionaries-tickets-156113833679

Saturday 12th June – 7.30PM (Premiere of Pre-Recorded Interview)
‘The Life and Work of the War Cartoonist Bill Mauldin’ – Raphael Ryan in conversation with Margaret Rowe
Raphael Ryan, from Newbridge Local History Group, will detail the interesting life and work of the cartoonist Bill Mauldin, in conversation with Margaret Rowe.
This video will be available on Kildare Decade of Commemorations YouTube Channel and Facebook page from 7.30PM on Saturday 12th June

Tuesday 15th June – 7.30PM (Premiere of Pre-Recorded Interview)
‘Irish Servicewomen in the Great War: From Western Front to the Roaring Twenties’ – Dr Barbara Walsh in conversation with Margaret Scott
Kildangan based historian Barbara Walsh will highlight some of the interesting stories from her book on Irish Servicewomen in World War I in this pre-recorded conversation with Margaret Scott.
This video will be available on Kildare Decade of Commemorations YouTube Channel and Facebook page from 7.30PM on Tuesday 15th June.

Thursday 17th June – 7.30PM
Book Launch & Talk:
Remembrance: The World War I Dead of Co. Kildare & Talk by Ronan McGreevy (The Irish Times)
This important new publication from Kildare Decade of Commemorations (compiled and edited by Karel Kiely, James Durney and Mario Corrigan of Kildare Library & Arts Service) lists the over 750 men and three women from County Kildare who died in World War I. The book will be launched by the Cathaoirleach of Kildare County Council, Cllr. Mark Stafford.
The launch will be followed by a talk by journalist and author Ronan McGreevy, author of Wherever The Firing Line Extends: Ireland and the Western Front.
https://www.eventbrite.ie/e/launch-of-remembrance-wwi-book-and-talk-by-ronan-mcgreevy-tickets-156115243897

Saturday 19th June – 10.00AM (Booking link below)
‘Strongbow and the Normans’ – Dr Conor Kostick
Conor Kostick teaches on the subject of crusades in Trinity College Dublin and is author of many books including Strongbow: The Norman Invasion of Ireland. This talk is based on his best-selling book, which explores colourful personalities and political twists and turns of this tumultuous period in Irish history.

Saturday 19th June – 11.00AM (Booking link below)
‘Rows and Ructions: military-civilian violence in Irish garrison towns’ – Dr Aoife Bhreatnach
Aoife Bhreatnach blogs on military barracks and the towns around them on http://irishgarrisontowns.com/. She is also author of Becoming Conspicuous: Irish Travellers, Society and the State, 1922-70 & hosts the podcast Censored Podcast @CensoredPod where she explores censored books in twentieth century Ireland.

Saturday 19th June – 12.00PM (Booking link below)
‘Guerrilla Warfare During The War of Independence’ – Lorcan Collins
Lorcan Collins is founder of the 1916 Rising Walking Tour of Dublin, host of the ‘Revolutionary Ireland’ podcast and is author of several books on Ireland in the 1912-23 period including Ireland’s War of Independence 1919-1921, The IRA’s Guerrilla Campaign. In this talk, Lorcan will highlight some of the key aspects of the IRA guerrilla campaign against Crown Forces during the War of Independence.

Link for all events on Saturday 19 June is: https://www.eventbrite.ie/e/military-seminar-2021-conor-kostick-aoife-breatnach-lorcan-collins-tickets-156117901847

Acknowledgements:
We would like to thank the support and assistance of the following:
• The County Kildare Decade of Commemorations Committee
• Kildare County Council
• Department of Tourism, Culture, Arts, Gaeltacht, Sport and Media (under Decade of Centenaries 2012-23 Initiative)
• JuneFest 2021
• The County Kildare Federation of Local History Groups
• National Gallery of Irelan

Previous post: A TIMELINE OF THE WAR OF INDEPENDENCE IN COUNTY KILDARE, 1919-1922

Next post: BLOOMSDAY. A JOYCEAN ODYSSEY THROUGH THE FLATLANDS OF KILDARE