By the early summer of 1920 the IRA had achieved a measure of success in clearing the RIC from smaller Irish villages and towns. As soon as a barracks was abandoned the local IRA burned it or rendered it uninhabitable, so that by the beginning of July 1920, 351 evacuated barracks had been destroyed, with a further 105 damaged. From the twenty-four RIC barracks in Co. Kildare at the beginning of the year, only six were active at the end of August. 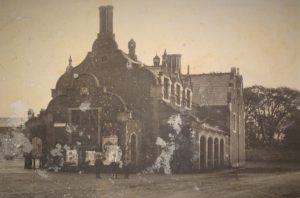 Courthouses also became legitimate targets of attack for the IRA. The destruction of courthouses was an attack on the crown legal system and on 15 July 1920 IRA Volunteers burned the courthouse at Athy. Situated on Barrow Quay at Market Square beside the Town Hall, the Courthouse was a fine modern building erected in the 1850s and presented to the town as a corn exchange by the Duke of Leinster in 1857. Within five years the building was idle and was adopted for use as the town’s courthouse before the end of the 19th century. On the night of Thursday 15 July a small group of IRA volunteers set the building ablaze using petrol and paraffin, which resulted in several small incendiary explosions. Residents in the vicinity of the building were startled by the slight explosions and a brilliant light as the Courthouse went up in flames. Nothing could be done to check the conflagration and the building burned all through the night. Next morning’s visitors to the Athy Show found the Courthouse a heap of smoldering ruins, with only the four walls remaining. As it stood in an isolated position beside the River Barrow no other buildings were endangered. In addition to the court, the building housed several offices, including the clerk of the Petty Sessions and out-of-work donation, all whose documents were burned.

On 9 August 1920 a claim for damages was published in the Irish Independent under the title:

‘No rate for malicious injuries.’

‘A claim for £4,000 has been made in respect of the burning of Athy Courthouse. The Athy Dressed Meat Society served notice of the withdrawal of a claim for the burning of an abattoir. The Assistant Minister of Dáil Éireann LGB wrote stating that: “No rate whatever will be struck by any Co. Council which gives allegiance to Dáil Éireann to meet criminal injury or malicious injury claims. As things now stand, it would not be possible to strike a rate and earmark the proceeds for a particular applicant. Any such funds would be at the mercy of the first comer holding a decree under Samuels’ Act of 1919. In view of these two facts we see no reason why your Council should incur the expense of defending this abattoir case, which would also involve the unpleasantness of appearing in the enemy courts.

“Moreover, is the principle underlying this whole question of malicious injuries, sound or fair. To saddle the community at large with damages caused by acts of blackguardism on the part of individuals is a peculiarity of English law in Ireland – a peculiarity Dáil Éireann can neither encourage or adopt. Where the moral force of the community has asserted itself in support of the efforts of the Irish Volunteers it has already been found that the number of such occurrences has become beautifully less.”

It was decided not to defend the claim for the burning of the courthouse.

Michael O’Rourke was one of six brothers – Dinny, Frank, Jim, Joseph and Tom – from Grand Canal Harbour who were members of the republican movement. Their father, Thomas, was a Labour Party member of Athy UDC. He was arrested with his three sons in the family home on 12 April 1920; arrested again on 9 November 1920 and held for ten days as a hostage. Subsequently re-arrested Thomas O’Rourke was held in the Rath Camp, the Curragh, until 9 December 1921. Rebuilding of the courthouse was completed sometime in 1928.

Five days after Athy Courthouse was burned John Hipwell led a section of Moone Company, IRA, in an incendiary attack on Castledermot RIC Barracks and Courthouse. Twenty-nine local volunteers, including John Wall, of Kilkea, three Kavanagh brothers from Killelan and Bart and John Travers, of Moone, took part in the operation, which was described by the Irish Times,

‘At 2.30 a.m. on the 20th Castledermot vacated police barracks, Athy district, was maliciously burned. The courthouse, which was situated about ten yards from the barrack, was also destroyed by fire. The sub-standards of weights and measures and a number of books were also destroyed. Three telegraph wires were also cut outside the village. A 2 a.m. on the 20th the vacated R.I.C. barrack at Nurney, Kildare district, was set on fire and completely destroyed.’

On 24 July 1920 the summary of official reports from Dublin Castle reported that the county of Kildare was in ‘a deplorable state’.