Rev. Warburton may have been inspired to produce this short publication for visitors, following an exciting discovery in the grounds of St James’ Churchyard the previous year…

The Nationalist of Friday, July 21, 1967 reported on a recent ‘Historic find at Castledermot’ at St James’s Church grounds in Castledermot. The report stated that ‘an unusual cigar-shaped stone’ had recently been unearthed in the grounds of the Church during tidying works. Miss Helen M. Roe, President Royal Society of Antiquaries of Ireland, had visited with a Board of Works official to inspect this exciting discovery and highlighted the unusual shape and decorations of the recent discovery. Miss Roe paid tribute to Rev. W. H. H. Warburton, Rector as St James’s, for the immense care he undertook of the new discovery by ensuring it was raised and supported when discovered. Miss Roe subsequently wrote a short piece in the Journal of the Royal Society of Antiquaries (1967) including these two images: 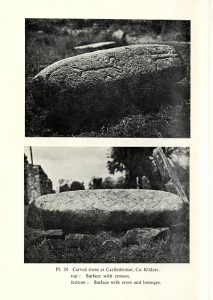 An expansive article ‘The Castledermot Hogback’ by Mr. J.T. Lang, with further images, subsequently appeared in The Journal of the Royal Society of Antiquaries of Ireland, 1971.This article showed how this hogstone recumbent monument was unique in Ireland, ascribed it to the Viking period and outlined its context in Britain and northern Europe.

The Local Studies, Genealogy & Archives Department has all volumes of the Journal of the Royal Society of Antiquaries of Ireland available to consult by prior appointment, as part of the County Kildare Library Service collections in Newbridge.