A family friendly day of events will take place in Kildare Town on Easter Saturday, 16 April from 11.45 a.m. to mark the 100th anniversary of the arrival of the Civic Guard/An Garda Siochána to Co. Kildare in 1922. The commemorative day has been organised and funded by Kildare County Council’s Decade of Commemorations Committee, An Garda Síochána, the Garda Síochána Retired Members Association, and the Department of Tourism, Culture, Arts, Gaeltacht, Sport and Media (under the Decade of Centenaries 2012-23 initiative).

This day of events will begin with the arrival of a parade led by the Garda Band to Market Square, Kildare, and addresses by An Cathaoirleach of Kildare County Council, Cllr. Naoise Ó Cearúil, Deputy Garda Commissioner Anne Marie McMahon and Marie Roche, Vice-President Garda Síochána Retired Members Association. Lord Edward’s Own Re-enactment Group will re-create the handover of the old Royal Irish Constabulary Station to the Civic Guard/An Garda Siochána. The Garda Band will then lead a march to the site of the former Artillery Barracks.

Kildare Town Garda Barracks will host an open day for members of the public with vintage cars on display in the carpark. Tom O’Neill, curator of a unique collection of police memorabilia, will host an exhibition in the old Courthouse, while Lord Edward’s Own Re-enactment Group will give a display of weaponry and uniforms of the period in the courtyard. Walking tours of the town, facilitated by Kildare Town Heritage Centre, will be led by former Garda, P. J. Hester.

Events in Co. Kildare in 1922 played a significant and pivotal role in the development of the future role and character of An Garda Siochána. At a government meeting on 10 April Eamonn Duggan, T.D., had suggested that Kildare Artillery Barracks would be suitable as a depot for the new Irish police force – the Civic Guard. On 15 April 1922, an advance party of Civic Guard left the R.D.S. showgrounds at Ballsbridge, Dublin, and travelled by train to Kildare Town. On reaching Kildare the party marched from the railway station to the Artillery Barracks where they accepted the handover of the garrison from the departing British troops. During the Civil War of 1922-3 and its aftermath the newly appointed Civic Guard came under armed attack, but they persevered not by ‘force of arms or numbers but on their moral authority as servants of the people’. 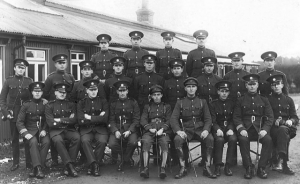