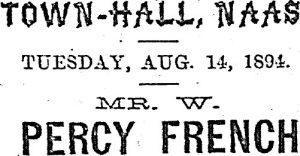 In the tumult of 2020, many anniversaries that would otherwise have been commemorated have slipped by as our communities were forced to concentrate on survival in the present rather than on contemplation of the past. One such anniversary worth putting on record is the centenary of the death of Percy French, composer and performer of some of the most celebrated of Irish ballads such as “Phil the Fluther’s Ball”, “The Mountains of Mourne” and “Come Back Paddy Reilly to Ballyjamesduff.”

Son of a long-established Co Roscommon family who gave their name to the estate town of Frenchpark in that county, he is strongly associated with two other counties – County Cavan where he held the imposing title of “Inspector of Drains” in his short official career and County Clare which was the setting of his jocular refrain on the ills of the railway system “Are You Right There Michael” which became one of the great train songs of all time.

Percy French was no stranger to County Kildare either having had an early outing of his repertoire at Punchestown races. Any announcement of his appearance at a venue in the county was certain to draw a full house. An advertisement in the Kildare Observer of August, 1894, proclaimed that in the Town Hall, Naas, Mr W. Percy French would perform his “Society Search Lights” being selections from his Up-To-Date Lectures as given by him with such success in the Antient Concert Rooms, Dublin.  These lectures were a series of satirical insights into the politics and society of Dublin at the time. Patrons of the Town Hall performance benefited from the then new technology of projected slides with Mr R. C. Orpen projecting “Comic Illustrations” by a powerful Oxyhydrogen Lantern. Tickets and a plan of the hall seating were available from the Printing Office, Naas.

French was back the following year for a particularly prestigious performance when he was on the bill in Naas Town Hall for an evening of entertainment on Valentine’s night promoted by the County Kildare Cricket Club, a social hub for the county gentry. He was highlighted as presenting two musical sketches – one entitled “Our Local Penny Readings” and the other named (perhaps politically incorrectly by modern standards) “A brush with the natives.”

His performance was followed by a night of amateur drama in which the actors were representatives of the big country houses in north Kildare. Among the cast was Sir John Kennedy of Bishopscourt House near Kill and Mr Hans Hendrick-Aylmer of Kerdiffstown House while Miss de Robeck of Gowran Grange was the stage manager. Indicative of the political status quo of the time, the performance was concluded by the singing of “God Save the Queen.”

Celbridge was the beneficiary of his talents just twelve months later when he gave a performance in the Courthouse which had his audience rolling in the aisles for hours. The Kildare Observer reported that “for fully two hours he kept his audience amused at his limitless powers of mimicry, his speeches and his mirth-making songs.” He had been invited to the Liffey-side town by Colonel Dease of Celbridge Abbey.

In 1897 he travelled on the railway from Sallins to Baltinglass via Naas to give a performance for the Literary and Debating Society. The programme was described as consisting of a concert and humourous performances by Mr Percy French. The Kildare Observer reviewer enthused that Mr French was in his happiest vein and was warmly applauded throughout to the extent that he “kept the audience in kinks for an hour.” His songs on the “Financial Relations” and “Sweet Marie” brought down the house and he complied with the wishes of his exacting hearers in the generosity of encores.

Even on occasions when he was not present his comedic influence was felt as his repertoire was a popular choice for other artists and amateur groups presenting musical entertainments. In a Grand Concert staged in Naas Town Hall in October 1896 to raise funds for a new organ for St David’s Church one of the performers, a Mr Mercer, was described as giving a “rattling “ rendition of Percy French’s humorous ditty “The night that Miss Cooney eloped” and he responded to a vociferous encore to sing another French number “Phil the Fluther’s Ball”. In the concert as a whole the county gentry were at their most prominent. The opening duet was rendered by Miss de Robeck of Gowran Grange and Miss Gray of the Kildare Observer printing office in the Square of Naas. Then Mrs C de Robeck who was described as possessing a fine contralto voice displayed her vocal power and quality in the happiest manner in her rendering of “The Carnival” which was loudly encored.

However, the reviewer’s purple prose was reserved for the performance of Miss Larousse Murphy whose richly powerful contralto voice was heard with telling effect. Her pronunciation was described as being quite clear and distinct, and as the song was so variedly rich in melody and the words so appealingly pathetic it admitted of being interpreted with impressiveness and in the young lady’s capable hands its beautiful symphony was done full justice. The result was a spontaneous and loudly continued encore to which Miss Murphy responded with equal grace and finish by singing “Love was once a little boy”.

It was testament to the outstanding popularity of Percy French’s repertoire that a full decade later his songs were still the chorus of choice for groups staging amateur and charity performances. Before Christmas 1906 a glittering concert in aid of the Kildare Society for the Prevention of Cruelty to Animals was staged in the Town Hall, Naas. It attracted a fashionable audience of the local elite described as a “galaxy of beauty and fashion.”  The event was opened by Lady Goulding’s (of Millicent House) band giving an excellent rendering of a pacey number known as “Mosquito Parade.” Then the comic element was provided by Major O’Hara who sang Percy French’s “Tim Whelahan’s Automobile” in such good style as to merit an encore.

The concert was interestingly ecumenical for its time as featuring on the programme were the boys of the Christian Brothers’ schools who were applauded for displaying sound training in their renditions of the patriotic airs “The Minstrel Boy” and “The Harp that Once in Tara’s Halls.” Perhaps indicative of a slight political shift, the night concluded not with “God save the Queen” but with a rendering of the Irish air “Eileen Alannah”.

While his works were being performed in town halls and parish halls throughout the land, Percy French was himself maintaining a breathless schedule of appearances and performances interspersed with a ceaseless composing of songs which struck a receptive chord with the audiences who thronged the music calls. Tuneful numbers with an endearingly Irish flavour such as “The Darlin’ Girl from Clare”, “Little Brigid Flynn” and “The Pride of Petravore” flowed from his prolific pen.

It is testament to his popularity that his diary showed that in one calendar month alone he performed in an incredible twenty-eight different towns in Ireland. It’s a fact too which testifies to the all-embracing reach of the rail network in Ireland in the early 1900s – only a rail system which linked Buncrana with Bantry and Greystones with Clifden could have made possible such an intensive schedule across the land.

For a man associated with musicality and merriment his life was tinged with personal grief. His wife Ethel Armytage-Moore who he affectionately referred to as “Ettie”  died in childbirth at just twenty years of age. He married again four years later to Helen Sheldon from Warwickshire who had come to Dublin to sing in the chorus of one of his operettas and they had three daughters.

His audiences declined somewhat during the years of the Great War but he kept up his relentless series of engagements. It was while returning from one such performance in Glasgow that he became ill and broke his journey at the home of his cousin, Canon Richardson, who lived at Formby near Liverpool. His condition deteriorated and it was there that he died on 24 January 1920.

He was interred a century ago in the grounds of a Merseyside church where he rests far from the mountains of Mourne which he had memorialised in his songs and distant from the drumlins of Cavan which had formed the context of much of his composition. His modest stone cross bears an inscription which confirms the affection in which he was held by the people of his native Ireland:  “In memory of a well-loved songwriter, poet, painter, author and entertainer – ar dheis Dé go raibh a anam.”

Next post: KILDARE IN THE REVOLUTIONARY DECADE (HISTORY IRELAND PODCAST)