Recently while on assignment to digitally record the WWI graves in St. Corban’s Cemetery, Naas, photographer Seán Sourke came across the grave of Tom Connor, a British Army veteran who died in Naas Workhouse in 1908. Thomas ‘Tom’ Connor, an ‘army pensioner’ and widower was seventy-six and died on 24 July 1908 of stomach cancer, which according to his death certificate he had suffered from for twenty years. The practice of sending poor people who fell on hard times to the area of their birth by Poor Law Unions (PLU) was quite common. Each PLU had its own workhouse and each union was named after the town in which the workhouse was located. They were financed by a poor rate extracted by local poor law valuations (ratings of rate payers). The idea was that the local PLU would look after the relief of their own paupers, so we can assume that Tom Connor was a native of Co. Kildare and that he was born in the late 1820s or early 1830s. Genealogist Karel Kiely found two possibilities: Thomas Connor, born 1825, son of William Connor, 86th Regiment, and Rose Holland; and Thomas Connor, born 1826, son of James Connor and June Farrell, Abbey Bridge, Naas.

The Kildare Observer of 1 August 1908 had a report on his death: ‘An old man named Tom Connor, belonging to Naas, and who saw service in the Crimea and India Mutiny with the 3rd Buffs (East Kent Regt.), passed away in the workhouse infirmary last week at an advanced age. Deceased, who was in receipt of a small pension, was an inmate of the workhouse for over twenty years. As soon as the military authorities heard of his death they decided to give him a military funeral, and on Saturday last his remains were interred in the New Cemetery with full military honours. The funeral, which was attended by a large number of the general public, took place from the workhouse. The coffin was borne on a gun carriage, and was preceded by a firing party from the Dublin Fusiliers. Immediately behind marched all the available officers, including Col. St. Leger Moore, C.B.; Major Rooth, R.D.F.; Capt. Molesworth, R.D.F.; and Lieutenant Wheeler, R.D.F. and men stationed in Naas barracks. On arrival at the cemetery the customary three volleys were fired, after which the “Last post” was sounded. The Rev. Father Murphy, C.C., officiated at the graveside.’

The Minute Books of Naas Poor Law Union also had a short report: ‘That on the 25th inst. the Military Authorities at Naas Barracks gave a Military Funeral to the remains of Thomas Connor, a pensioner who died in the Infirmary, and was about 20 years in the house.’

There were 325 residents in Naas Workhouse that week. Thomas Connor’s was the only death recorded. 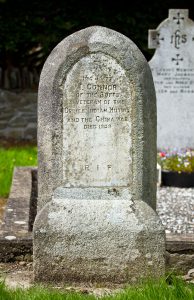 Next post: THE IRISH LANGUAGE MOVEMENT IN COUNTY KILDARE