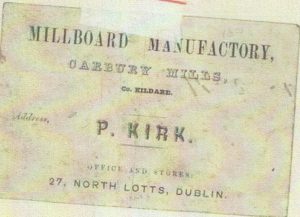 I had always thought that Callender Paper Manufacturing Company Limited, which operated from Celbridge mill, County Kildare (1903-1905) was Ireland’s sole manufacturer of paper, using peat as a constituent.

Research on the Carbury section of the 1930’s Schools’ Folklore Commission, reveals that Carbury Mills preceeded the Celbridge venture by about 30 years.

Anthony Holten author of the monumental “The River Boyne” (Hidden Legacies, history & lore explored on foot and by boat, 640pp and published in 2016) identified three water powered Mills in the short stretch of the infant Boyne in Newberry Hall demesne. The flax mill was nearest the modern Derrinturn – Carbury Road (R403) where the tail race and the infant Boyne were each culverted under the road. According to John Mooney, a Mr. Wolstenholme, a Scotsman,had built the flax scutching Mill.Records show he had purchased the 583 acre Herberton estate in 1840, and adding ‘Hall’ to ‘Newberry’… Wolstenholme was succeeded as owner in 1870 by William Pilkington, who was connected with Alex Thom, the publishers. The paper manufactured was millboard which was used for book binding. About 20 hands were employed in the Mill and another 10 for preparing and drawing bog-stuff to the mill which was worked by both water and steam power. The wages paid were from 9 to 12 shillings per week, and the paper pickers were on piece work. Women workers were employed as rag pickers and the rags came mostly from Dublin. John Mooney said he worked there until about 1881 at a wage of 10 shillings per week. He was employed forking the raw material – rags and old paper into a deep pit where they were all pulped together mechanically.

The manager was a Mr. Martin who lived locally. The Mill closed in 1881 owing to competition from German manufacturers. In about 1913 Mr. J. Robinson, the new owner, since 1912, of Newberry Hall, had the remains of the Mill removed.

“The economic proceedings of the Royal Dublin Society (Vol.1-July, 1907-Part 10) contains “Reports upon the Irish peat industries”, by Hugh Ryan, and it makes no mention of Carbury Mills, while devoting a section to Callender’s Celbridge Mills

Our thanks to Declan O’Connor for sending on this interesting piece on an aspect of the industrial heritage of County Kildare.