Hosted by Kildare County Council’s Decade of Commemorations Committee and

Ireland has a long, proud military tradition. The aim of this inaugural seminar is to look at all aspects of Irish military history, drawing chiefly on events and personnel from within our nation’s past.

Great episodes in Ireland’s history are intermingled with escapades in far-off places like Vietnam, the Balkans and the African continent. 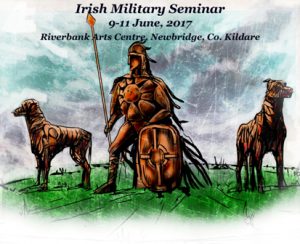 The image was drawn by David Butler  – Fionn, Bran and Sceolan –  the marvellous sculpture at Ballymany Roundabout on the Curragh, the work of Lynn Kirkham of the Greenmantle studio.