While on assignment for Co. Kildare Local Studies Department taking photographs of all WWI memorials, plaques and graves in Co. Kildare Seán Sourke came across the above headstone in Confey Cemetery, Leixlip. Because it was the 75th anniversary of the D-Day landings in Normandy he thought we would also be interested in the unfortunate casualty named on the headstone. The particular inscription on the McCluskey family grave read: ‘Also cousin L. Cpl. Joseph Balfe died in Normandy 19th Aug 1944.’ 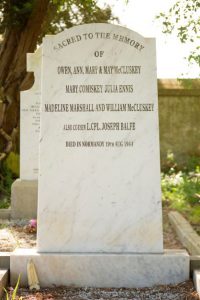 A search of records by Co. Kildare archivist and genealogist Karel Kiely revealed that Joseph Balfe was born in April-June 1926 in the registration district of Celbridge. He was the son of William Balfe (groom) and Isabella McCluskey, who had married in St. Mary’s Church, Leixlip, on 15 June 1914. They had two other children born in Leixlip – Helen, born in November 1915 and Hilda, born in September 1918. In the 1911 Census William, a coachman/domestic servant was living with his parents in Barnhill, Clonsilla, Co. Dublin, where his Meath-born father, Patrick, was a gardener/domestic servant. In that same year Scottish-born Isabella McCluskey was living in Newtown, Leixlip, with her father Owen (born in Tyrone) and her mother, Helen (born in Scotland). Owen McCluskey gave his employment as a ‘horse slaughterer and farmer’.

At some stage the Balfe family moved to England as the 1939 UK Register recorded William and Isabella Balfe living at Cottage Routs Green, Buckinghamshire, Wycombe, with their three children. William was employed as a gardener, while his daughter Helen was working as a maid. When he came of age Joseph Balfe joined the locally recruited 1st Oxfordshire and Buckinghamshire Light Infantry, or the Ox and Bucks, as they were more commonly known. Throughout 1943-44 the Ox and Bucks prepared for the invasion of France, scheduled for 5/6 June 1944.

In the days following D-Day, as the Normandy bridgehead expanded, more formations arrived in France, including the Ox and Bucks, who landed on 24 June 1944 as part of the 53rd (Welsh) Division. With the Ox and Bucks was Leixlip native Joseph Balfe, eighteen-year-olds, with an address at Radnage, Buckinghamshire.

The following day the Ox and Bucks marched to the area of Colomby-sur-Thaon and took up a defensive position in reserve. On 2 July they took over a battalion position from the 8th Royal Scots in the area of Le Haut du Bosq. The succeeding days were spent in improving the position and the nights in patrolling.

An earlier attack by the British and Canadians on the city of Caen was unsuccessful and when the Germans counter-attacked, the Ox and Bucks moved to positions around the Odon bridgehead where they suffered some casualties from heavy German artillery fire. The Allies launched further attempts to capture Caen, but did not enter the city until 9 July; by then, much of it had been destroyed. After holding the line the Ox and Bucks first major engagement with the Germans was the successful attack to capture the village of Cahier and a nearby mill. Fighting around Caen continued for much of the month, with the battalion sustaining significant casualties. They later fought in the Second Battle of the Odon. In August it took part in an advance towards Falaise. The Allies needed to take Argentan, Alençon and Falaise quickly to prevent the German 5th and 7th Armies from escaping an encircling movement.

After a few quiet days in the area of La Rabitiere, the Ox and Bucks resumed their advance on 17 August, receiving orders to concentrate west of Falaise and march by night to positions cutting the Falaise-Argentan road. This went smoothly, with only a slight amount of opposition, in which D and C Companies came under small-arms fire from some woods. D Company also knocked out a German staff car and captured enemy orders, maps and a prisoner.

1st Ox and Bucks took up position astride the Falaise-Argentan road at dawn on 18 August and were relieved at 1600 hours by the 6th Royal Welch Fusiliers.  They moved back to a harbour area just west of its former positions, but from there were ordered to prepare for a night attack on the town of Pierrefitte. After having moved to a concentration area the Ox and Bucks received orders postponing the attack and moved back to wait for tank and artillery support.

The attack on Pierrefitte was launched on the 19 August with the support of the divisional artillery. German resistance proved to be very light and the village was taken by 1600 hours. One tank and one Loyd carrier were blown up by mines. Lance-Corporal Joseph Balfe was possibly killed while an occupant of the small tracked Loyd carrier. He is buried in Banneville-La-Campagne War Cemetery along with 2,175 Allied soldiers killed in the fighting around Caen.

Pierrefitte’s capture helped close the Falaise pocket, encircling the German 5th and 7th Armies, which were effectively destroyed by the Allies.  The Allied victory at Falaise signified the end of the Battle for Normandy, with a decisive German defeat.