The Short Grass County have turned out many prominent athletes in the past, and in Joe O’Reilly, whom we feature this week, we have a player who is fit to rank with such as “Larry” Stanley, Paul Doyle, Jack Higgins, and others of Kildare fame.

Joe, who has guarded the sticks for Kildare County, is a native of Rathangan, and learned his football with the local club in the year 1919, when they played in the Junior Championship.

In 1920 he played with Rathangan in the senior County Championship when they were beaten by Naas after a close game. In the same year his club figured successfully in the final of the “Leinster Leader” Cup, defeating Athy at Newbridge.

In 1922 joe joined the National Army and as a result his football activities were much curtailed until 1924, when he was selected to represent Kildare Parish against a strong D.M.G. team, in aid of a local charity, which the Dublin men won. After this O’Reilly transferred to the Garda, and his abilities as a goalkeeper were strong in evidence in their League and Championship games.

In 1925 the Garda finished in a prominent position in the League Table, and the following year they won it from O’Tooles.

In 1927 Joe figured on the Garda team that won the Championship from O’Tooles, and this year he also assisted the garda to beat a strong Kerry Selection at Killarney.

In 1928 O’Reilly’s Club reached the semi-final of the Dublin Championship, but a successful objection debarred them from competing further. At the time their prospects looked remarkable good.

The Garda, however, were successful the following year in defeating O’Tooles in the final of the Championship, and on the same day they travelled to Drogheda and played a drawn game with Meath in the first round of the Leinster Championship, winning the replay by 5 points.

This present year Joe was selected to keep goal for Kildare against Kilkenny in the second round of the Leinster Championship, which Kildare won by 8 points, and he also figured successfully in the final against Leix at Croke Park.

O’Reilly does not confine his activities to the football field, as he is a handball player of no mean ability, and he was lately selected to represent Dublin in the Hand Ball Doubles Leinster Championship against Wexford, and he also appeared in the final of the City and County Intermediate S.B. Doubles against the holders, Civil Service, which the latter won, while in 1927 Joe won the Garda Novice High Jump.

It will be seen from the foregoing that the popular Kildare goalkeeper has a record of which any athlete might well be proud and considering that in the Championship matches played this year no goals have been scored against him, it may safely be said that he is at the top of his form, if not actually the best goalkeeper at present guarding the sticks on the Gaelic field. 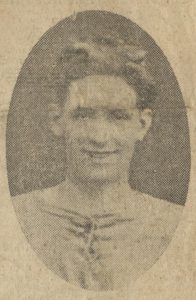