County Kildare Decade of Commemorations Committee are organising a special event at the Curragh Racecourse on Monday 12 December to remember the execution of seven men in late December 1922 at the Curragh, Co Kildare. This was the largest single day execution of the entire Irish Civil War.

Historians, Mario Corrigan and James Durney will present the story of The Rathbride Column at the Curragh Racecourse on Monday 12 December, within a stone’s throw of the cottage at Mooresbridge where the men were arrested 100 years ago. This event is being held in conjunction with Cill Dara Historical Society and Milltown Heritage Group.

Refreshments will be served from 7PM, while a new publication by Mario Corrigan Nine Lives Mooresbridge, December 1922 will be launched at 7.20PM with copies  on sale at the event. The main historical talk will start at 8PM sharp, with a special performance planned for the night also. All welcome. 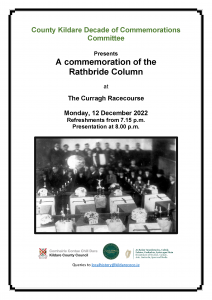