Thomas Rawson is remembered for his cruel treatment of the rebels and suspected rebels in Athy during the tunultous period of 1797 and 1798, particularly the use of the Triangles for whipping poor unfortunate victims. A cruel man whom Thomas FitzGerald described as described as ‘a man of the lowest order, the offal of a dung hill’. His home at Glassealy was burned by the rebels.

In 1807 he published a Statistical Survey of County Kildare drawn up for consideration and by direction of The Dublin Society. 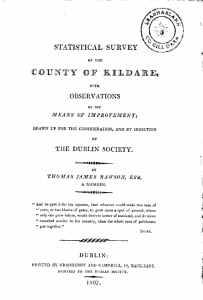 “And he gave it for his opinion, “that whoever could make two ears of corn,

or two blades of grass, to grow upon a spot of ground where only one grew before,

would deserve better of mankind, and do more essential service to his country,

than the whole race of politicians put together.”