After the signing of the Truce in July 1921 political prisoners, especially internees not charged with any offence, were expected to be released within days. When there was no sign of an early release some began plotting their escape. In the Rath Internment Camp, the Curragh, tunnelling began in earnest with two rival tunnels – the Dublin Brigade Tunnel and Jim Brady’s Tunnel – heading towards the wire.

By this stage the Rath Camp had become overcrowded and many internees were housed in tents. Subsequently, the Royal Engineers began to erect a new compound for internees on the spot where the tunnel exits were planned. Sappers also began deepening the trench with which they had found a previous tunnel and it was now likely that they would unearth the new tunnels. The conclusion to escape before this happened became paramount.

A decision had to be made and it was agreed that one of the tunnels should be finished and used without delay. It was decided to use Jim Brady’s tunnel because it was nearer the wire. Twenty-five men were picked from each group of tunnelers and certain officers from GHQ were to be given priority, among them Commandants Joe Vize and Tom Byrne.

The date for the escape was set for 9 September 1921. Jim Brady and Joe Galvin went first as the fifty or so other selected internees waited their turn in the tunnel entrance. Brady and Galvin found that their exit hole came up short and they had to run a length of twine about twenty yards through two barbed wire entanglements. The twine would act as a guidance to the escapees in the darkness. 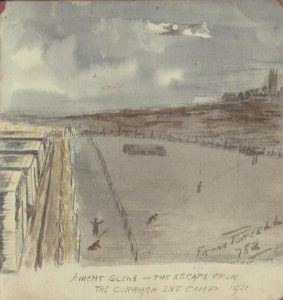 To make matters worse a thick fog descended on the night of the escape. The rendezvous was in front of the Curragh Racecourse Grandstand, but because of the fog many did not make it. Some men got lost in the fog and ended back at the wire looking in at the searchlights and arc lamps glowing through the mist. The Dublin escapees walked through Newbridge and Naas and made their way to Sallins Railway Station where friendly railway men put them on trains to the capital. The escapees from the West were assisted by local people. One group were sheltered and fed in a house at the Hill of Allen, and then taken across fields to the Rathangan home of Fr. Smith, the local curate and a republican sympathiser. Local Volunteers brought fresh clothes and footwear along with horses and traps to his house and conveyed the escapees to Carbury. At least 54 prisoners escaped that night, and despite large scale searches by the military and the Black and Tans none of them were caught. All of them returned to active duty with the republican movement.

Kildare Decade of Commemorations Committee has produced a short video to commemorate the 100th anniversary of the Rath Camp Escape with narration and music by local singer/songwriter, Darren Brereton.

Patrick Tunney was an IRA volunteer from Cushlough, Westport, Co. Mayo, who was imprisoned in many jails in Ireland and Britain, including the Rath Camp from which he escaped. In 1920, Hamar Greenwood became the last Chief Secretary for Ireland, the principal minister responsible for Irish affairs, and was responsible for the introduction of the infamous Black and Tans to Ireland. In his poem Hamar’s Lament Patrick Tunney pokes fun at both Greenwood and Captain John Taylor (Assistant Under-Secretary in Dublin Castle) over the embarrassment that ‘the prisoners are escaping from the Curragh Camp’.

This project is supported by the County Kildare Decade of Commemorations Committee and the Department of Tourism, Culture, Arts, Gaeltacht, Sport and Media (under the Decade of Centenaries 2012-23 Initiative).