THE TRIAL OF JOHN DEVOY

The Trial of John Devoy

On 24 September the Friends of John Devoy staged their annual event to commemorate the birth (3 September 1842) and death (28 September 1928) of the republican giant, John Devoy. ‘The Trial of John Devoy’ took place in the Courtroom, at Lawlor’s Hotel, Naas. 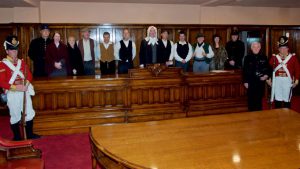 In front of a crowd of onlookers ‘John Devoy’ was arrested at the bar of the hotel by the Dublin Metropolitan Police. He was escorted by two armed Redcoats upstairs to the courtroom. Devoy’s trial, and that of four of his Fenian comrades, took place in the packed courtroom. Relatives and members of the public looked on as John Devoy stood defiant in the dock. The trial was a forgone conclusion – all the defendants were found guilty of treason and sentenced to long terms in prison. As John Devoy and his comrades were led away in handcuffs his girlfriend, Eliza Kenny, sobbed, while his mother, Elizabet, lamented on John’s trials and tribulations in his quest for Ireland’s freedom from Britain.

The trial was re-enacted by members of the Kill Music and Drama Group, and the Prosperous and Allen Drama Groups, along with Lord Edward’s Own Re-enactment Group, Monasterevin. The commemorative event was sponsored by the Co. Kildare Decade of Commemorations Committee.