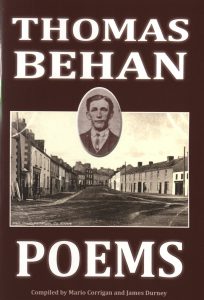 Poems by Thomas Behan, compiled and edited by Mario Corrigan and James Durney, is a new publication which has been produced as part of the Co. Kildare Decade of Commemorations programme 2021. The booklet contains a facsimile of an original copy of the poems published in 1923, which is held in the Kildare Local Studies, Genealogy and Archives collections.

Tom Behan was born and bred in Rathangan, Co. Kildare. As a prominent member of the local Volunteers, he was arrested in the wake of the Easter Rising in 1916, and was interned in Wakefield Jail, England. He fought during the War of Independence and was interned again just as the country found peace. When the Civil War broke out, he joined the anti-Treaty forces, and was captured and killed on the 13 December 1922.

This new publication will be available in branch libraries in County Kildare shortly. A pdf of the booklet is also available here: Thomas-Behan-Poems but as it is a low resolution copy the scans of the poems theselves are a little poor. We hope to rectify this in the coming days.

Next post: KILDARE-BORN WOMEN WHO SERVED IN THE FIRST WORLD WAR