Wilful Murder. Lt. John Hubert Wogan-Browne, Kildare, 10 February 1922 by Mark McLoughlin, is the latest publication which has been produced as part of the Co. Kildare Decade of Commemorations programme.

On 10 February 1922, a British Army officer, Lt. Wogan-Browne, was shot dead during a robbery in Kildare town. The murder sent shockwaves through the local community and contributed to a crisis in Anglo-Irish relations.  British troop withdrawals were suspended and there was outrage at Westminster. The Irish Republican Army, British Army and Royal Irish Constabulary combined to search for the culprits, while General Michael Collins sought to reassure Winston Churchill that everything was being done to catch those responsible:

‘Have just been informed by telephone that we have captured three of those responsible for the attack on Lieutenant Wogan-Browne. Everyone, civilian and soldier, has co-operated in tracking those responsible for abominable action. You may rely on it that those whom we can prove guilty will be suitably dealt with.’

This account by Mark McLoughlin is released to coincide with the centenary of the murder and provides details of this poignant incident in local and national history. The publication was edited and produced by the Local Studies, Genealogy and Archives department of Kildare Library Service.

Copies of the book are available free in Co. Kildare’s branch libraries on a first come first served basis.  It is also available to download at:

Supported by the Department of Tourism, Culture, Arts, Gaeltacht, Sport and Media. 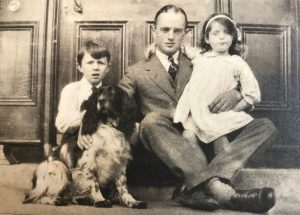 Next post: CENTENARY OF ULYSSES (KILDARE CONNECTIONS WITH JOYCE)