The World Turned Upside Down: Lord Edward Fitzgerald, the British Army, and the battle for Irish Freedom – Stella Tillyard 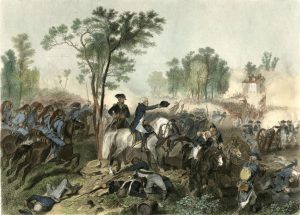 From Carrickfergus to Carcassonne: The Crusade against the Cathars – Paul Duffy

From Confusion to Counter Insurgency: The Irish Security Response to the Outbreak of Violence in Northern Ireland 1969-1972 – Dr. Patrick Mulroe

Military and naval tactics and the suppression of historic piracy in Ireland – where it all went wrong – Dr. Connie Kelleher

THE EVACUATION OF THE BRITISH ARMY FROM KILDARE, 16 MAY 1922

The evacuation of the British Army from Kildare, 16 May 1922

After the signing of the Anglo-Irish Treaty on 6 December 1921 enlistments to the Irish regiments of the British Army were suspended. In February 1922 the British Secretary of War announced the disbandment of six Irish regiments, including the Royal Dublin Fusiliers. The last detachment of the Royal Dublin Fusiliers left Naas Military Barracks on 7 February. They marched out through the front gates and down through the town to the railway station. Many of their friends and relations were waiting at the platform to bid them farewell. On the previous night they had marched through the town singing ‘The Wearing of the Green.’ Their destination was Bordon, Hampshire, where they joined the 1st Battalion. The Dublins departure ended over one hundred years of links with the British Army and Naas Military Barracks. Naas Barracks continued to be used to house British troops in transit until May.

Recruitment in Ireland to all other branches of the British Army was closed in April 1922. The formal disbandment ceremony of the Irish regiments took place on 12 June 1922 when the regimental colours of the five Irish regiments – Royal Irish Regiment, Connaught Rangers, Leinster Regiment, Royal Munster Fusiliers and Royal Dublin Fusiliers – were handed over to King George V at Windsor Castle, London. The South Irish Horse, the sister regiment of the North Irish Horse, was also disbanded.

Clogheen, Co. Tipperary, was the first British Army barracks handed over to the republican forces (28 January 1922), while Beggar’s Bush, in Dublin, became the first important public display of the transfer of British Army property to the Provisional Government (31 January 1922). By April forty-one of the fifty-four military station locations – including Kildare Barracks – in southern Ireland had been evacuated, leaving the British Army concentrated in Co. Kildare and Dublin City.

On 10 May the Final Orders for the evacuation of the Curragh Camp were issued stating that the evacuation would be worked from a zero hour of 10.30 a.m. on 16 May. The occupation of Hare Park by an advance party of eighty National Army troops took place on the afternoon of 15 May. On the following morning Irish and British officers met at the Staff House and in heavy rain proceeded to formalise the transfer of the camp from British control to the Provisional Government. There was no exchange of compliments between both groups, and the British soldiers marched off as the Irish troops approached. Groups of Irish and British officers proceeded to inspect the perimeters of the camp. Then the two remaining platoons of soldiers, from the Northamptonshire Regiment, formed up. The Last Post was sounded, and the hand-over was officially completed.

The Freeman’s Journal reported: ‘That the significance of the event needed no emphasising … there was no ceremony to mark the surrender of this, the greatest of England’s military strongholds in Ireland.’ When the Irish troops went to hoist the tri-colour they found that the British had cut down the three flag poles in the camp. (On evacuating a military installation, the removal or destruction of flag-poles was a long British Army tradition.) When two Board of Works men set about repairing them, they were arrested. It was mid-day before a pole was found and Lieut. General J. J. ‘Ginger’ O’Connell, O.C., raised the Irish flag on the water tower. Irish soldiers saluted as Desmond Fitzgerald, T.D., representing the cabinet and several Irish and foreign journalists looked on. 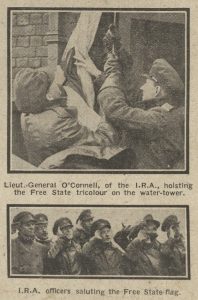 Hester Dooley was the only woman present at the hand-over of the Curragh Camp on 16 May 1922. She lived at 41 Duke Street, Athy before moving to Dublin in February 1921 to work in the Republican Publicity Department. Hester became secretary to Pieras Beaslai (editor of An tÓglach) and later secretary to Gen. Ginger O’Connell, when Beaslai travelled to the USA. She also worked for Dublin Brigade OC Oscar Traynor and carried dispatches and messages to prominent republicans. After the handover she remained at the Curragh Camp as a clerical officer for about one month. In 1923 Hester Dooley married Athy republican Joe May.

The evacuation of the Curragh was co-ordinated with the evacuation of Naas Military Barracks and Newbridge Cavalry Barracks. At 10.30 a.m. Newbridge Barracks was formally handed over to the National Army under the command of Captain Joseph Rowan, formerly of the Republican Police, Newbridge Company, IRA, and Capt. O’Kelly, Board of Works. There was no ceremony, except the change of guard. As reported in the local papers, everything ‘passed off in a business manner’. Almost immediately the barracks was occupied by 200 trainee Civic Guards from Kildare Barracks. In Naas the last British troops in the barracks were a company of the Leicester Regiment who handed over the installation to Irish troops headed by Colonel Commandant Seán Boylan, Brigadier Thomas Lawler (Halverstown, Naas), and Captain John Joyce. Again there was no ceremony to mark the occasion as the Leicesters had sawn down and removed the flag-pole so that the tricolour could not be hoisted until the new garrison had located and erected a temporary one alongside the main gate.

Over 300 vehicles brought the last British troops to locations in Dublin’s Phoenix Park. Special trains also departed from the Curragh Siding and Newbridge Railway Station. The Leinster Leader reported that the departing military convoy took an hour to pass through the town of Naas and that ‘there were several machine guns at the ready position and many light armoured cars in evidence’. Crowds of people had turned out along the road to Dublin to witness the passing of the British forces, but few cheered them.

The Kildare Observer reported that: ‘Tuesday of the present week marked an epoch in the life of the Co. Kildare, when there was a complete evacuation of the British military from posts that have never previously been unoccupied. Chief of these places, of course, was the Curragh Camp, which has been the headquarters of the British Army in Ireland, and in which at all times anything from six to 16,000 troops were quartered. On Monday final movement of troops from the Curragh commenced, a constant stream of lorries passing through Naas towards Dublin. The new army took up its quarters, and the Curragh, associated from time beyond the memory of the oldest inhabitant with the British Army, had passed into Irish hands and became the headquarters of the Irish Army.’

However, the evacuation of the Crown forces from County Kildare was a huge blow to the local economy and caused a collapse in trade. Newbridge, built around the military barracks, was ‘like a ghost town’. Unemployment in the area was sharply felt – 1,000 workers who had served the garrisons had lost their jobs and in North Kildare 3,000 men were out of work. A deputation of residents from the Curragh and Newbridge, led by Jack Fitzgerald, a former  IRA officer and a member of Kildare County Council met Michael Collins and several of his ministers. They were informed that the Curragh Camp was about to be reopened by the National Army and by August the employment of civilians in the Curragh and Newbridge barracks began.

The handover on 16 May 1922 was soon overshadowed by the Civil War that followed and by the fact that loss became such a potent focal point. The Curragh Camp became the HQ of the National Army, but also housed thousands of anti-Treaty republican captives, while Newbridge Barracks became an internment centre and the scene of a great escape. But, therein is a future story.

6th Irish Military Seminar 4-11 June 2022 The Irish Military Seminar returns with an exciting full programme of lectures this year in venues across the county, including Castletown House, Celbridge, Naas and Newbridge Libraries and Newbridge Town Hall, featuring renowned historians and authors, including Stella Tillyard (Aristocrats and Citizen Lord) and Professor Diarmaid Ferriter, our keynote speaker who will give a talk based on his most recent book, Between Two Hells: The Irish Civil War. “It is not the duty […]
Read the full article...

DEATH OF A CRIMEAN VETERAN

DEATH OF A CRIMEAN VETERAN

The Kildare Observer 2 January 1904 Death of a Crimean Veteran We regret to record the death of Mr. Patrick Turner, of Naas, one of the few surviving Crimean veterans. Deceased, who had attained a ripe old age, took part in all the battles in the famous campaign of his regiment the 50th, or “Blind Half Hundred”. Mr. Turner was granted a modest pension on being invalided, but on being medically certified as fit for work, that small emolument was […]
Read the full article...

The Nationalist and Leinster Times 25 October 1968 Co. Surgeon buys Naas Norman castle The Norman castle at Naas, believed to be among the oldest inhabited ones in the country, now has a new owner. He is the popular Co. Surgeon, Mr. Jack Gibson, F.R.C.S.I., of “The Hill House”, Tipper Naas. King John’s Castle, which was built in the twelfth century, was knocked down to Mr. Gibson for £14,850, after some spirited bidding at the public auction in Dublin, on […]
Read the full article...

The Leinster Leader 25 September 1965 Tanyard Demolished When workmen began work last week to demolish buildings in Ballitore tanyard and clear the site, there was much speculation in the district about the purpose of the work. Rumors that a new industry was being established were rife. A well-informed source, however, told the reason for knocking down the buildings as that they had been considered dangerous. Opened in 1801 by the Cullen family, the tannery was for over 125 years […]
Read the full article...

Saturday 16 April 2022 An Garda Síochána Centenary Celebrations Kildare Town 1922-2022 A family friendly day of events will take place in Kildare Town on Easter Saturday, 16 April from 11.45 a.m. to mark the 100th anniversary of the arrival of the Civic Guard/An Garda Siochána to Co. Kildare in 1922. The commemorative day has been organised and funded by Kildare County Council’s Decade of Commemorations Committee, An Garda Síochána, An Garda Síochána Retired Members Association, and the Department of Tourism, Culture, Arts, Gaeltacht, […]
Read the full article...

The Leinster Leader 9 November 1901 The Late Dr. Darby, Monasterevan The news of the death of Dr. Martin Darby, J P, which took place at his residence Moore Street, Monasterevan, will be received throughout Kildare and in many adjoining counties with deepest feelings of regret. Dr. Darby, who had been but a fortnight ill, passed peacefully away shortly after 7 o’clock on Monday evening last. During his illness and even to the day prior to his death great hopes […]
Read the full article...

An Garda Síochána Centenary Celebrations   Kildare Town 1922-2022 A family friendly day of events will take place in Kildare Town on Easter Saturday, 16 April from 11.45 a.m. to mark the 100th anniversary of the arrival of the Civic Guard/An Garda Siochána to Co. Kildare in 1922. The commemorative day has been organised and funded by Kildare County Council’s Decade of Commemorations Committee, An Garda Síochána, the Garda Síochána Retired Members Association, and the Department of Tourism, Culture, Arts, Gaeltacht, Sport and Media […]
Read the full article...

Taoiseach in New York P. J. Lennon American Feature, The Nationalist and Leinster Times 11 September 1948 In contrast to the visit of Mr. de Valera to this country some time ago, there were no bands or huge crowds to greet the arrival of Prime Minister John A. Costello. With his wife, Mr. Sean Nunan, Irish Consul, and his Aide, Comdt. Michael Byrne, the Irish premier attended a Solemn High Mass at St. Patrick’s Cathedral on Sunday. Cardinal Spellman presided. […]
Read the full article...