‘Kildare’s forgotten Fenian, John Kenny,’ will be remembered at the annual John Devoy Seminar on 18 September 2021, at 19.30 in a presentation by his great granddaughter, Fran Christ. This presentation will be followed by a short talk by Liz Gillis, Historian in Residence for Dublin South Co. Council, on ‘The boy in the photograph: Volunteer Dan Head and the burning of the Custom House, 1921.’

Kildareman John Kenny worked closely with ‘the greatest of the Fenians’ John Devoy, in New York and Ireland for over fifty years. A multi-term president of the Clan-na-Gael in New York, Kenny was the liaison between the Clan and the Irish Republican Brotherhood. In 1914, Devoy sent Kenny on a dangerous secret mission through war-torn Europe. Receiving word that the mission had been completed, Clarke set in motion the plans for an uprising.

The thirty-minute online presentation by Fran from New York City, will be followed by a question-and-answer session. She has published articles on John Kenny in the Journal of the County Kildare Archaeological Society, IrishCentral, and the Journal of the New York Irish History Roundtable.

‘The boy in the photograph: Volunteer Dan Head and the burning of the Custom House, 1921’ by Liz Gillis. One of the most iconic photographs of the Irish War of Independence shows a young man lying dead on the street as a crowd of people walk by with their hands above their heads. This photo was taken just moments after the Dublin Brigade of the IRA burned the Custom House. And the young man in the photo was Dan Head, a member of the IRA who took part in that operation and was one of five Volunteers who didn’t survive. Historian Liz Gillis will discuss the life of Dan Head and the operation in which he was killed at the young age of 17. 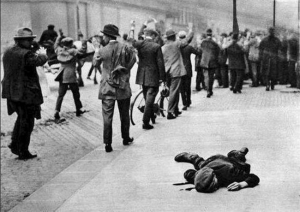 Booking is essential at Eventbrite https://johndevoy2021.eventbrite.ie