Stately, plump Buck Mulligan came from the stairhead, bearing a bowl of lather on which a mirror and a razor lay crossed…

The above is the opening sentence of James Joyce’s famous modernist novel Ulysses, published 100 years ago today by Paris bookseller Sylvia Beach on 2 February 1922.

Historian Liam Kenny previously highlighted the strong connections between County Kildare and James Joyce for Bloomsday 2021, including references to Clane, Millicent, Rathcoffey and Sallins in Ulysses.  See BLOOMSDAY. A JOYCEAN ODYSSEY THROUGH THE FLATLANDS OF KILDARE

James Joyce himself spent his formative years in Clongowes Wood College from 1888 to 1891 and the School Library is named after him today.

The Kildare connection with the opening sentence and the opening ‘Telemachus’ episode in particular is that Buck Mulligan is partly inspired by another student of Clongowes Oliver Gogarty, who attended the school from 1896-7 while studying for first year arts examinations for the Royal University of Ireland. 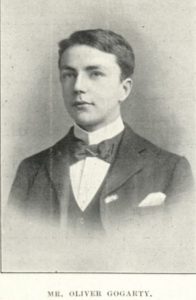 Interestingly, Gogarty was listed in the Christmas 1897 volume of The Clongownian as having excelled in these exams with two other individuals. (James Meenan who later became a widely known political economist and author of The Irish Economy Since 1922 amongst other publications; while Hugo V Flinn was later a businessman, Fianna Fáil TD, Parliamentary Secretary to the Minister for Finance, and State Turf Controller during the Emergency where he played a pivotal role in ensuring that the Ireland had sufficient energy supplies throughout the Second World War).

The character Buck Mulligan is widely revered in Ulysses for his role in rescuing several men You saved men from drowning (1.62). Gogarty himself had saved the lives of two students while in Clongowes, one from drowning and another from choking. He later saved the life of at least one other man from drowning in the River Liffey in Dublin city centre, with The Clongownian of June 1898 proudly recording the recent heroism of their former student.

Oliver Gogarty’s principal other contribution to Clongowes was as the star player on the school football (soccer) team. The Clongownian noted his exploits on the playing field also, lamenting the effect his departure had on the fortunes of the school team in their Christmas 1897 volume!

Kenny, Liam BLOOMSDAY. A JOYCEAN ODYSSEY THROUGH THE FLATLANDS OF KILDARE

The Clongownian 1895 onwards (Kildare Local Studies, Genealogy & Archives Collections have all volumes of this publication up to 2020).