Martin O’Brien was born in 1899 in Cork, but moved to Naas prior to 1901 where his father was a postmaster. He was a member of the IRA and Sinn Féin during the War of Independence and organised Green Cross concerts for republican prisoners’ dependents. He took the anti-Treaty side in the Civil War. He was a noted athlete, marathon runner, and GAA figure and was winner of the Dublin to Naas and Navan to Croke Park marathon races; he was a founder member of Naas Athletic Club. Under the pen name Conleith Martin he wrote ballads, stories and plays for many national publications, including The United Irishman. He was an activist during the 1939-45 IRA Campaign and helped organise a secret communications system collecting and delivering messages to interned republican prisoners at the Curragh Camp. Martin O’Brien died at his home on Sallins Road, Naas, on 25 June 1961, and was buried in St. Corban’s Cemetery, Naas. A ten-foot-high Celtic Cross was unveiled over his grave on Sunday 2 June 1963 by a joint committee of Sinn Féin and Naas Athletic Club. 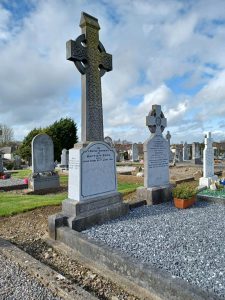 Previous post: THE KILLING OF SIR ARTHUR VICARS IN APRIL 1921