THE KILLING OF SIR ARTHUR VICARS IN APRIL 1921

The Killing of Sir Arthur Vicars in April 1921 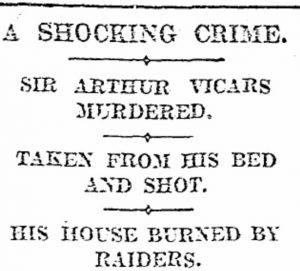 On 14 April 1921, Sir Arthur Vicars was shot dead by the Kerry I.R.A. in the front lawn of the family seat of Kilmorna House near Listowel County Kerry. Sir Arthur had  strong Kildare connections, serving as a Honorary Secretary of the County Kildare Archaeological Society from the formation of the Society in 1891 right up to his death. He wrote several articles in the Journal of the Society, including on Jigginstown Castle & the Flatesbury family of Ballynasculloge and Johnstown County Kildare. He also resided intermittently in Grange Con on the County Kildare/Wicklow border.

There are competing narratives over why Vicars was killed, with members of the local I.R.A. company involved later giving conflicting accounts to the Bureau of Military Pensions as to the reason and background to this episode. Allegations that he was an informant to Crown forces were strongly refuted by his valet, World War 1 veteran and ‘I.R.A. associate’ Michael Murphy. The execution style of his killing has been described as unwarranted and exceptional for County Kerry during the War of Independence. The possibility that there was an agarian angle has also been mooted. The large Kilmorna House was burned down by the attackers during the raid, with Vicars’ sister-in-law Edith de Janasz and the steward of the estate subsequently claiming in compensation claims in 1924 that there had been interference on the estate throughout 1920 and 1921. In late December 1924, an angry group of local landless labourers marched on Listowel with a fife and drum band to meet the landlord representatives under the banner of ‘Kilmorna for Labour’ to protest at the suggestion that sections of the estate was to be divided up amongst a small number of farmers ahead of the landless labourers ‘who had first claim’.

Ultimately, it appears that Vicars was killed by the local I.R.A. who believed (incorrectly probably) that he was an informant to Crown Forces. A sign ‘Spies, Kilmorna House’ was left at the scene by the I.R.A, while they later claimed that they burned the house down as there were rumours that British forces would occupy it. There in all likelihood was a very strong agarian undercurrent to the killing also however.

The death of Vicars featured in the headlines of  national and local newspapers across the island of Ireland over the following week, although the funeral of the long-serving Archbishop of Dublin William Walsh dominated much of the coverage. Surprisingly, neither The Leinster Leader or The Nationalist & Leinster Times appear to have reported on this tragedy (The Kildare Observer – which was most sympathetic to the Anglo-Irish and gentry classes  and therefore most likely to report on his death – is missing April 1921 in the original editions found in the Kildare Local Studies & Archives Collections or on  Newspaper Archives digitised version unfortunately). The County Kildare Archaeological Society did mark his passing at their Annual General Meeting held in the Town Hall in Naas on 25 January 1922 with the passing of a resolution of condolence proposed by the President of the Society (the Earl of Mayo) seconded by Rev. Michael Norris P.P.

That the members of the County Kildare Archaeological Society, at the first opportunity, desire to place on record the loss they have sustained in the death of Sir Arthur Vicars, who had been for so many years one of its Hon. Secretaries; and they desire to convey their sympathy to Lady Vicars on her bereavement.

Sir Arthur Vicars is best known for his role in the infamous disappearance of the Crown Jewels from Dublin Castle in 1907. As Ulster king of arms and principal herald of Ireland, registrar and knight attendant of the order of St Patrick; he was keeper of the insignia of the order of St. Patrick (the Irish ‘crown jewels’). Following their disappearance, a commission of inqury blamed Vicars for not keeping proper care of the Crown Jewels which resulted in his dismissal from this prestigious role in 1908. There is another very strong Kildare connection to this infamous episode, with Francis Shackleton (brother of the explorer Sir Ernest Shackleton from Kilkea) who worked and shared a home with Vicars widely believed to have been responsible for the robbery. Vicars firmly placed the blame for the crime and for his own subsequent demise in his will which was only released in the 1970s. Sir Arthur Vicars was survived by his wife Gertrude Wright and was buried near Cheltenham, England on 20 April 1921 in the churchyard where his parents had been interred.