FROM CELBRIDGE TO BEGGARS BUSH BARRACKS

Co. Kildare has a long history with the Irish Defence Forces, but it is not that well documented that the county housed the first barracks of the new National Army. It was at Celbridge in the north of the county and not on the midland plains of Kildare that the first unit of the National Army initially paraded.

Following the ratification of the Anglo-Irish Treaty by Dáil Éireann on 7 January 1922, British forces began withdrawing from Ireland and handing over their barracks to the new National Army. The National Army was formed from the Irish Republican Army (IRA), which had emerged during the War of Independence (1919-21). In the spring of 1921, the IRA had reorganised itself from loose companies, brigades and battalions into divisions to form a regular standing army.

On 14 January 1922 the Parliament of Southern Ireland, from which the anti-Treaty members absented themselves, met in Dublin’s Mansion House and elected the Provisional (temporary) Government, which would oversee the end of British rule and organise elections for a new Irish government. Michael Collins became Chairman of the Provisional Government and two days later led his ministers to Dublin Castle to take over administration of the country from the British. It was planned to create a new regular National Army around the existing IRA, but the impending split in the republican movement changed the course of events and it was decided to establish a force from units loyal to Michael Collins and Richard Mulcahy, Minister of Defence. The most loyal unit was the Dublin Guard, formed from the Squad and the Dublin Active Service Unit (ASU). It was decided that this unit would be the nucleus of the new National Army and the IRA training camp at Celbridge Workhouse was picked as the site to begin the process. (The new Irish government was in the process of dismantling the Poor Law Union system and closing the workhouses.) In late January 1922 Captain Paddy O’Daly, along with lieutenants Joe Leonard and Padraig O’Connor arrived from Dublin to Celbridge with about forty other volunteers. O’Daly and Leonard were former Squad assassins, while O’Connor had been a member of the Dublin ASU.  Padraig O’Connor had lived in Celbridge from 1912 to April 1916, but the family left for Dublin when his father Seán O’Connor, a Limerick-born IRB organiser and Gaelic League teacher, lost his job.

The unit was sent to the co-op tailors in Abbey Street, Dublin, to be measured for the newly designed National Army uniforms. Much of the men’s time was spent training in the rudiments of marching, drilling and the handling of rifles for ceremonial duty. The Dublin volunteers were more used to pistols, the favourite weapon, for street ambushes, and few, if any, had a working knowledge of the Lee Enfield rifle. Their first assignment was to be the taking over of Beggar’s Bush Barracks, former depot of the notorious Auxiliary Police Division.

As Beggar’s Bush was the first barracks ever handed over by the British the Provisional Government was making sure that the army made a good impression. On 1 February the detachment were assembled in Celbridge Workhouse to dress and equip. They presented a smart appearance in their new greyish-green uniform, with dark blue facings, Sam Browne belts, brown leather leggings, rifles and burnished bayonets.

The republican forces did not possess military transport and so the detachment were brought by large touring cars to the Phoenix Park where they were met by the Fintan Lalor Pipe Band who led them on their historic march into Dublin city centre. Their passage along the Quays evoked numerous cheers, which increased in volume as the unit turned across the river towards the City Hall, the home of the new Free State government, where a dense crowd awaited their arrival. Many citizens found vantage points on the balcony and steps about the building. The guard there turned out and came to the salute. Arthur Griffith, Michael Collins, and other Ministers stood on the steps and saluted as the detachment, in close formation, passed and answered the command of ‘Eyes Right.’

Shortly after three o’clock the detachment marched into the barrack square of Beggar’s Bush to relieve the British of their first military stronghold in Ireland. They drew up in front of the Orderly building, the band taking up a position at the right rear. Richard Mulcahy, dressed in a Commandant’s uniform, and accompanied by Eoin O’Duffy, Chief of Staff, inspected the men, and presented Captain O’Daly with a standard – a large tricolour flag. The barracks subsequently became the new headquarters of the National Army. 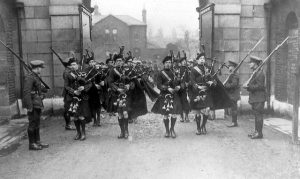 From a spectacular point of view the taking over of the barracks was more impressive than the ‘surrender’ of Dublin Castle. Photographs were taken of the Irish troops entering the barracks, but no photos were allowed of the British troops leaving Beggar’s Bush.

Note: The accompanying photographs were given to the author over twenty years ago by Patrick Brady, former caretaker of Leixlip Library, whose father Michael Brady (Bishopscourt, Kill), served with Kill Company, IRA, in the War of Independence and the National Army during the Civil War.