At 4.07 a.m. on Wednesday, 28 June 1922, Dublin awoke to the boom of a field gun as the National Army began its bombardment of the republican garrison in the Four Courts. Two 18-pounders, borrowed from the British, were positioned at Winetavern Street and Lower Bridge Street, and barely scratched the stone of the huge building. As well as artillery fire, the National Army used rifle fire, Lewis guns, Hotchkiss guns and Thompson sub-machine guns to batter the building. The republicans had machine guns and rifles on the roof of the courts, but they were no match for the National Army’s arsenal. The garrison held out until 4 p.m. on Friday 30 June when they surrendered to the pro-Treaty forces. The republicans suffered relatively few casualties in the battle for the Four Courts: three volunteers were killed and eight wounded. The National Army forces, however, suffered at least seven killed and upwards of seventy wounded. Most of the National Army wounded occurred when mines laid by the republicans exploded – the cause of the explosions has never been verified – which destroyed the central hall and priceless historical records dating back hundreds of years. 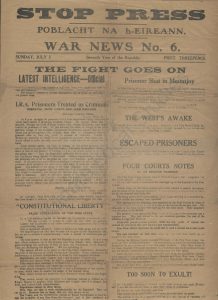 Between midnight and 1 a.m. on 15 April 1922, an anti-Treaty force under Rory O’Connor had seized the Four Courts and several other public buildings around Dublin in a show of defiance calculated to provoke a response by the British troops still stationed in the city. The republicans used whatever was at hand to fortify the building, including barbed wire and sandbags. Many windows were barricaded with heavy legal law tomes, law books and weighty ledgers. The occupation drew scant attention in the Irish press and there was no military cordon placed around the complex. In the following days and weeks, the leaders and other personnel of the garrison were allowed to come and go unhindered.

There were at least four Kildaremen in the Four Courts garrison, all of them veterans of the War of Independence: James Bolger (26), Kilcullen; Joe Buckley (24), Maynooth; Liam Duffy (23), Monasterevin; and Edward ‘Ned’ Horan (22), Castledermot. However, both Liam Duffy and Joe Buckley evaded capture. Joe Buckley was later a member of the Gresham Hotel garrison on Sackville/O’Connell Street, so was not in the Four Courts at the crucial time. Liam Duffy, who was a member of the headquarters section, must have avoided capture as he was subsequently arrested on 6 September 1922 at Shankill, Dublin, after an ambush and charged with possession of a revolver.

During the occupation a large collection of cars and lorries had been commandeered by the anti-Treaty forces and assembled there to provide transport for Volunteers carrying out attacks on the north. The garrison also had a commandeered Rolls-Royce armoured car known as ‘The Mutineer’. Ned Horan was reputed to be one of the crew of The Mutineer, which had its tyres shot off and was subsequently captured by National Army forces and renamed ‘The Ex-Mutineer.’ The surrendered garrison were marched off to captivity in Jameson’s Distillery. From there they were taken to jails around the city. It is not clear if Ned Horan and James Bolger were among those captured.

After his arrest Liam Duffy was imprisoned at Mountjoy Jail, Dublin, Tintown Camp, the Curragh, and later at Hare Park, the Curragh. Labelled as ‘dangerous’ he was not released until 31 May 1924. Liam Duffy worked with Athy Post Office and as a Social Welfare and Excise Officer. A life-long gaelic speaker Liam was a member of the county branch, Gaelic League, and became actively involved in Athy in promoting the Irish language. Liam Duffy died on 9 June 1979, aged eighty, at his home in Enniscorthy, Co. Wexford.

Joe Buckley ran the family grocery business in the town from which his father and the Kildare men had left for Dublin at Easter 1916. He was a life-long member of Fianna Fáil and played an active role in the Local Defence Forces during the Emergency (1939-45). Joe Buckley died aged seventy-seven on 23 May 1975, at Naas County Hospital. Ned Horan died aged fifty-six on 3 April 1956, at Woodlands, Casteldermot. James Bolger emigrated to England in the 1930s and died at his residence at March Street, Burnley, on 16 September 1966.