As the battle raged at the Four Courts, other anti-Treaty republicans took up position in and around Sackville Street (now O’Connell St.) Former Kildare TD Art O’Connor did not approve of the Anglo-Irish Treaty and when the Civil War broke out he again took up arms and joined the republican leaders occupying the block of hotels in Sackville Street. Oscar Traynor, as OC Dublin Brigade, made the elementary mistake of seizing several buildings in Sackville Street on the side opposite the Four Courts so that there was no possibility of linking up with the garrison. The republicans tunneled into each building, linking them into an impregnable stronghold, or so they believed. Cooped up in this ‘stronghold’ or ‘The Block’ was much of the Republican leadership – Traynor, de Valera, who reported to his old unit as a private soldier, Austin Stack, Robert Barton, Cathel Brugha, Countess Markievicz and Art O’Connor. They were courageous leaders, but bad tacticians, disorganised and lacking any overall strategy. The National Army troops surrounded the buildings and for eight days the garrison were under continuous attack. When it was no longer safe to occupy the buildings the republican leaders withdrew. Cathal Brugha with Art O’Connor and sixteen others remained holed up in the Hamman Hotel. They were to go on firing until they could no longer remain in the building. Then they were to surrender to save lives.

By the evening of July 5 most of the republican garrisons in Sackville Street and the surrounding areas had either being dislodged or had surrendered. Apart from the intermittent sniping, the only position still active in the street was the Granville Hotel. It had been under artillery fire for most of the day. By 7.15 that evening the artillery fire had ceased and the hotel was ablaze. National troops set up machine gun emplacements in the lanes around the building. At 7.30 Brugha ordered his men to surrender as the building was in danger of collapsing. He told Art O’Connor to go out and bring his comrades with him. O’Connor advanced into the lane, hatless, his civilian clothes covered in dust. He waved a white table-cloth as a flag of surrender and approached National Army officer, Lt. Craney. There was some confusion as the republicans were arrested and questioned as to the whereabouts of Brugha. O’Connor kept repeating: ‘We fought until we could fight no longer. There have been only sixteen of us in this block for the last three days.’ Five of them, he added, had been captured in the surrender that morning. With the party were Mary MacSwiney, widow of the late Lord Mayor of Cork, and Kathleen Barry, sister of Kevin Barry. O’Connor’s coat was torn and was partly singed. Asked if de Valera had been with them, he replied, ‘Yes, but he, and the other chaps got away three days previous, along with Austin Stack.’

Three, nurses who remained with the beleaguered garrison to the last, shed tears. The prisoners included some young boys, who had Sacred Heart badges pinned to their coats, and carried revolver holsters. One of the party said they had been ordered to surrender by Brugha, who then emerged defiantly, a revolver in his hand. Brugha made a run for the troops surrounding him. There were cries for him to stop but he advanced on a barricade manned by riflemen. The soldiers fired, aiming low, but a bullet severed a femoral artery. Brugha fell to the ground, in a pool of blood. He died two days later. A short distance away the garrison were lined up and then the order ‘Prisoners’ fall in!’ was given by Art O’Connor. The captives were surrounded by two lines of soldiers and marched away to Mountjoy Jail. Art O’Connor remained a prisoner until well after the Civil War ended. 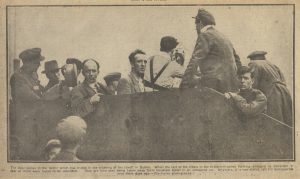