A new publication, authored by historian Seamus Cummins, is being launched in Leixlip Library on Thursday 1st December at 7PM to mark the centenary of the Battle of Pike’s Bridge that took place in early December 1922. This significant Civil War military engagement is the last major battle to have taken place in County Kildare. Titled ‘Mullaney’s Men’ : The rise and fall of the anti-Treaty forces in North Kildare, Grangewilliam 1922 this publication explores the Civil War events that took place in the North Kildare area in late 1922.

All welcome to attend the launch! Cllr Vanessa Liston, Chair of Celbridge-Leixlip Municipal District will formally launch the publication, while author Seamus Cummins will also speak on his research. Complimentary copies of the publication will be available to those in attendance at the launch. All welcome!

Please register your attendance at the launch here: bit.ly/3Xdij6A 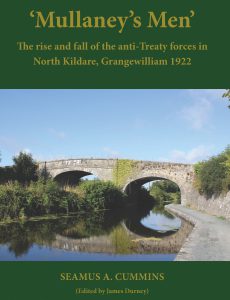