Vera (McCormack) Farrell died on 18 April 2018 at her home in Oughterard, Straffan, Co. Kildare. She was ninety-three. On the 100th anniversary of the sinking of the liner Lusitania Vera was then ninety and one of only two living direct descendants of a survivor of that fateful event. Vera played a part in the commemoration of the anniversary, contributing to a TV programme, newspaper reports, several radio interviews and an event organised by the Co. Kildare Decade of Commemorations held in Naas Community Library. She was immensely proud to help tell her father Tom McCormack’s story and how he survived the tragic sinking. ‘I think he was just a very, very brave man,’ Vera said. Vera also joked about ‘her few hours of fame’ and was delighted to invite neighbours and friends in to see ‘her movie’.

Vera’s son, Fintan Farrell, has written a small book telling Vera’s story from her birth in 1924 and her early years in Killina, Co. Kildare, her move to Oughterard,  to her death in 2018. He paints a vivid picture of early nineteenth century Ireland and of a woman with a strong vibrant, self-determined character. 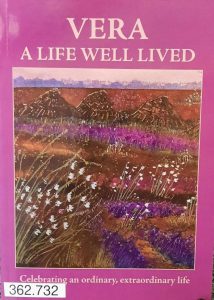 The cover image is of the Bog of Allen (which Vera loved) by Dearbhla McArdle and the book contains many photographs and an illustration of Vera’s garden. Vera. A life well lived is available from Skew Bridge Publishers, Kildare.

Next post: JIM QUINN RECALLS WATCHING THE LILIES IN 1919